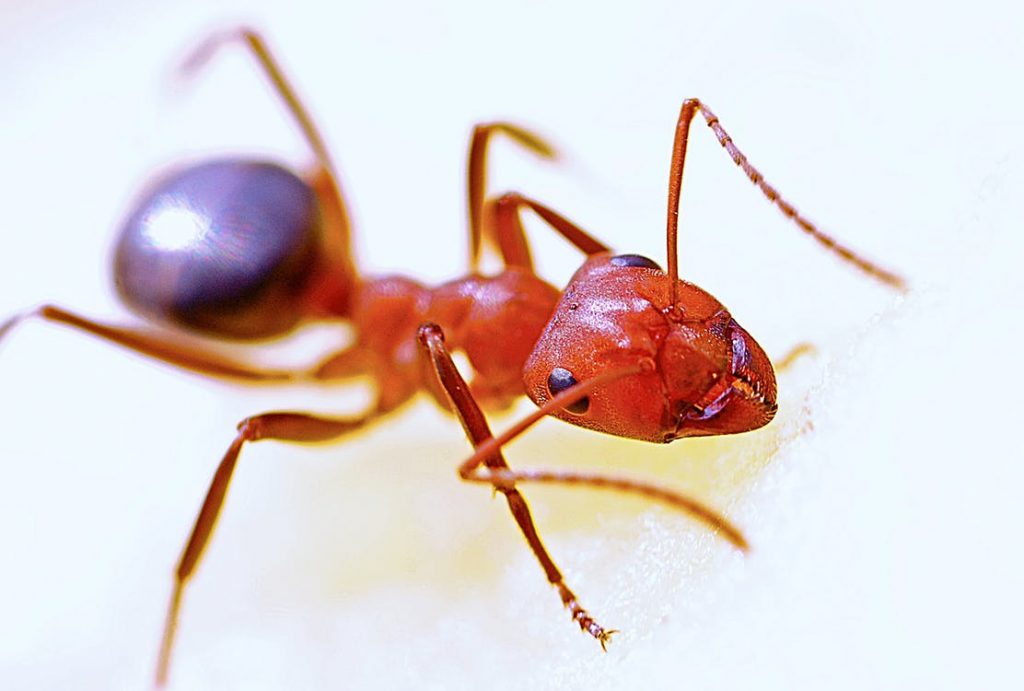 I spend hundreds of hours researching and testing so that I can provide you with the best money saving tips. I am supported by our readers and may earn a commission if you buy through our Affiliate Links at no cost to you. Thank you so much for your support. Read More

Sooner or later you are going to have to deal with ants in your worm bin. This is a case study in real time showing how to solve the problem.

I set up this worm bin in June. The bin was prepared by placing some composted manure on top of a layer of newspaper. The next layer consisted of last year’s leaves. The total thickness was about 9 inches.

I placed the bin under a tree to protect from heat. Worms dislike light so the shade from the tree reduced the amount of direct sunlight.

On June 15th, my worms arrived from Uncle Jim’s Worm Farm. They were packed in dry peat moss for the trip.

During shipping, worms get dehydrated so I poured a cup of water onto the colony. After that, I released them onto the top of their new bin.

So far I had not seen a single ant. The only problem I had has been varmints. They kept coming in at night to steal my eggshells and anything else they could find. That problem was easily solved by placing a lid on the bin. A task I have not had time for.

Anyway, back to my ants.

Ants love sweets and bread so that’s what they went after in early September. We had some blackberries go over the hill and I’ve been baking a lot of bread this week. Two loaves per day was the breaking point.

This ant colony does not live in the bin. How can I tell? Because the ant trails can be seen leading to and from my worm bin. Their strategy is to bring back as much food as possible to the main colony in the ground.

Step 1: Deter Entry To The Bin

Right now they have a free for all entry to the bin. They have traveled either up the legs or from the lid that was touching the fence. The lid was temporary since I didn’t have time to build something permanent.

I re-positioned the lid and then went after the legs.

One thing ants can’t do very well it tread water. So I scrounged up 4 plastic containers to put under the legs. I could not find 4 wide containers so I used whatever could be found.

Yogurt containers just barely work since they are not wide enough. I’ll use them temporarily until I can find something wider. Plant saucers would work great but they are buried somewhere in the garage.

The point is to act quickly and reduce their numbers. I may not stop all of them today, but something is better than nothing.

I’ll upgrade my water mote as soon as I can find something better.

I’m growing organically so I’m not resorting to toxic poisons.

Instead, I’ll use diatomaceous earth to help dehydrate the ants to death.

This is not a kill all solution, but it does help. Diatomaceous earth also acts as a deterrent. Ants are smart enough to stay away from it.

Diatomaceous earth does not work as well wet as it does dry.  You can see in the photo to the right where a lot of it got wet.  I’ll re-apply more after the surface as dried out.

I’m going to watch the ant population and pay close attention to the water motes. If I see any ant trails on the legs, this will indicate that they have breached the water barrier.

I may also try a sticky barrier on the legs called Tanglefoot. Tanglefoot is a OMRI listed barrier that lasts a long time and prevents insect from crossing.

I will also keep the bed hydrated since ants don’t care for excess water. Fortunately I built a flow through worm bin so it’s hard to over water.

To see how these strategies worked, check out the results.

Help Me Help You

Smart Penny Pincher is a participant in the Amazon Services LLC Associates Program, an affiliate advertising program designed to provide a means for us to earn fees by linking to Amazon.com and affiliated sites. Affiliate links are special links where we can earn a small commission if someone buys through the link. It costs you nothing extra but helps me out a lot. Through your support we are able to continue to update this website and provide resources for you.

Thank You For Your Support!