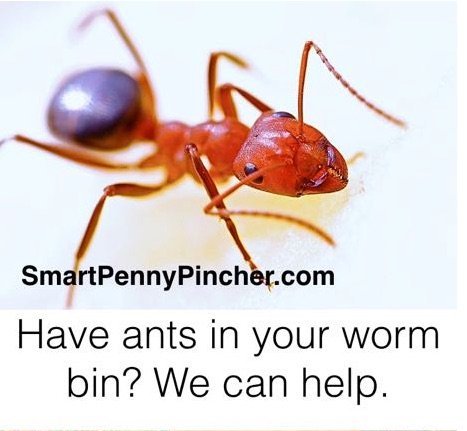 I spend hundreds of hours researching and testing so that I can provide you with the best money saving tips. I am supported by our readers and may earn a commission if you buy through our Affiliate Links

at no cost to you. Thank you so much for your support. Read More

As you know, pesky ants decided to move into my worm bin. It reminded me of a nature documentary where the ants carried leaves away like a well trained army. There they were marching along at a relentless pace. Well, these are not leaf cutters, but they sure were determined to take over my bin.

“Of course you know, this means war”

Let’s see how my strategies worked.

Well I’m very pleased to say that the results from the 3 step technique are better than I hoped for.

In the first part of the case study, I isolated ants from the bin, then killed stragglers, and finally increased the moisture level.

Just 24 hours after applying this 3 step process, the ant trail at the back of the fence disappeared. Wow, I was not expecting that at all.

By building a water moat, the main colony had no further access to the worm bin. Great news. Looking inside was also promising.

There were no ants at all on the worm bedding. The diatomaceous earth worked very well. Better than I expected since it typically takes 24-48 hours to work. I did see a few ants wandering around on the inside walls, but that’s to be expected.

As you know, diatomaceous earth works by microscopically cutting insects so that they dehydrate and then die. Not pretty, but it works.  It also is harmless to worms and they don’t mind it in the bin at all.  I don’t think they even notice.

Diatomaceous earth also acts as a deterrent (not a repellent). Ants are particularly smart regarding this hazard so they avoid it.

Still no ants on the worm bedding, but a few remained on the side.

This is really good news.

There was not an ant to be found anywhere. Neither on the bedding or the walls. This was surprising that it worked this well.

Keep in mind that I still have not upgraded from the temporary yogurt containers that I used for the moat. I was convinced these would not work that well, but even 1″ of water was effective.

The containers aren’t aesthetically pleasing, so I’ll swap them out with something nicer. (And I did)

If you have an ant problem, try this technique and let me know how it works. I’m interested to see if others have similar results that I had.

If you are looking for a good source of worms, bins, and accessories, check out our affiliate partner Uncle Jim’s Worm Farm.  This is where I bought my worms.  I’m really happy with the worms.

Help Me Help You

Smart Penny Pincher is a participant in the Amazon Services LLC Associates Program, an affiliate advertising program designed to provide a means for us to earn fees by linking to Amazon.com and affiliated sites. Affiliate links are special links where we can earn a small commission if someone buys through the link. It costs you nothing extra but helps me out a lot. Through your support we are able to continue to update this website and provide resources for you.

Thank You For Your Support!